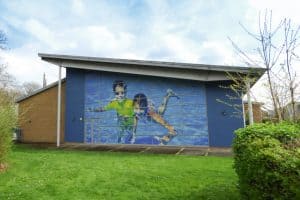 One way vision window graphics, also known as see-through graphics, enable the use of windows, or any glazed panel, for the deployment and display of advertising messages, decorative effects, security or privacy measures, and directional signing among other types of printed and applied graphics.

Applied one way vision graphics are also commonly referred to as Contra Vision or Contravision. Contra Vision is in fact a trademark that identifies a UK and USA based company of the same name and many of the products and technologies, supporting the production of one way vision graphics, which it sells or licenses to other materials manufacturers.

A typical one way vision graphic will comprise a design printed upon a specialised perforated window film. The film further comprises a white surface, a black surface and an adhesive layer the whole assembly being provided with numerous perforations arranged in a staggered pattern.

The design is printed on the white side of the film and then the whole assembly is adhered to a window or other transparent panel. The design will be visible to observers on the design side of the panel, while those on the other side will see through the panel as though the applied design were not there at all.

Being seen from one side and not being seen from the other, enables the use of windows to display graphics even in locations where a view out must be maintained. It is known for whole buildings to be wrapped in such materials thus creating landmark scale advertising statements. 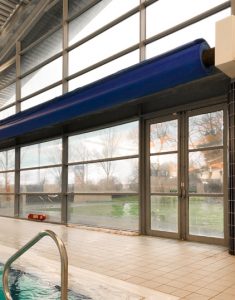 By carefully managing light levels, it is possible for graphics manufacturers to create, for example, window displays where the applied message itself can be seen through to an article beyond. This practice is used to extend the reach of point of sale campaigns to the pavement outside shop windows and is know to be very effective.

The use of one way vision graphics materials and Contra Vision products in particular has become very popular in the field of privacy. It is often desired to maintain a view through a window from the interior of a building and yet stop those outside seeing in. Privacy window films, including perforated window films accomplish this at little expense. Applied films are often left unprinted.

One of the major areas of application for one way vision window graphics is transport advertising. Typically applied to the windows of bus fleets, such graphics deliver out-of-home advertising campaigns on behalf of major brands and exert influence in pedestrianised zones where other forms of advertising might be regulated.

Careful selection of the material used to produce perforated one way vision window graphics can influence the strength of the image displayed versus the degree of see-through accomplished. Typical percentage include 80/20 in favour of the image, 60/40 30/70 and 50/50.

Digitally printed one way vision window graphics are available in very low volumes or where data is variable.

Could Voodoo help you to be seen and seen through?