Bristol is home to the Voodoo DesignWorks. Our Bristol-based roots connect us directly with some of the most revolutionary technological developments the sign and allied industries have ever known. We’re more than just a signmaker in Bristol. We’re innovators. We think and deliver new. Ours is quite a story.

Let us put our expertise to work for your business whether its big or small, just starting out or long-established. We’re creative to our very core and you’ll be as delighted with our service as you’ll be with our prices.

There are lots of ways to get in touch with us and we supply free estimates with pleasure. You can mail or call us and even speak to us on-line if you’d like a personal meeting. 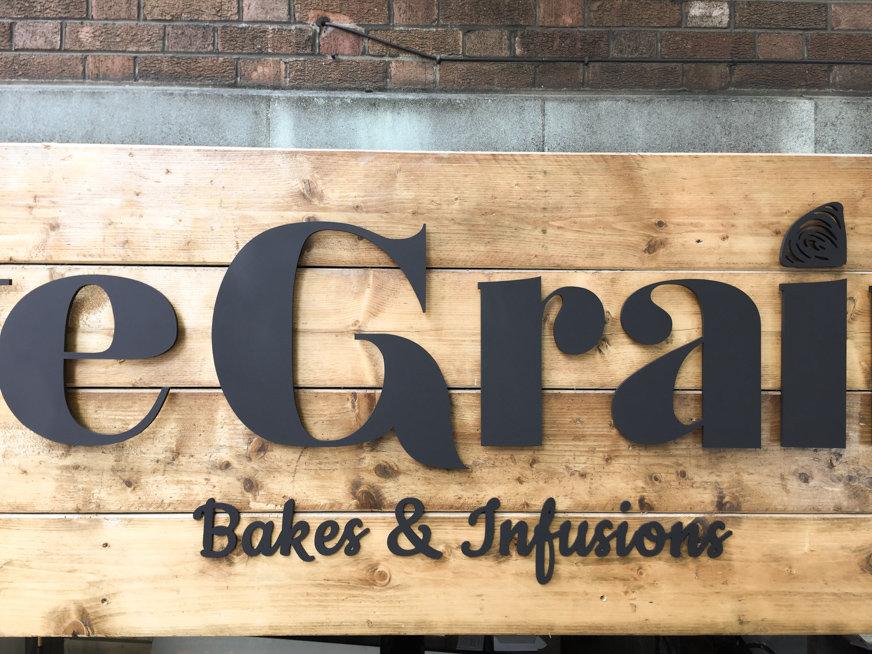 Voodoo and signs for cafes are no strangers to each other. Restaurant signs in general have much to communicate beyond the name of the business that’s under the shopfront. In the case of Five Grains, its cafe sign has to say “wholesome” in a pretty big way and it has to play well with shopfront window graphics too. We think we got it right.

Let’s send you a brochure…

It’s amazing what the Voodoo DesignWorks could do for you. It’s all in our brochure and we have one with your name on it.

We started with as honest-a-looking slab of pine as you’ll ever see and turned it into the fascia sign’s background. It looks like it has seen a few summers but it’s well protected from the elements. Next comes the cafe signs’ lettering. That’s a fret-cut material with some very subtle things going on, if you look closely, those little design wrinkles are informed by elements of the superb printed window graphics underneath.

The cafe window graphics are printed on a great material that makes the window look as though it has had thousands of pounds lavished upon it in traditionally etched work. It hasn’t. It’s a rather special film that we know how to work with and which can be removed if needed. There’s some eye-catching busy scribbles going on in the window graphics’ design and it counterpoints the simplicity of the shop front signs – goes against the grain you might say.

Book an online presentation and discussion with us at a time that suits you.

Voodoo-Connect delivers a live, broadcast-quality video and audio presentation and discussion from us to you and its streamed live right to your desktop and as many people as you need to invite. We can discuss your project, you can all see our samples, tour our facility and more – no need for a camera at your end because we don’t see you or your colleagues.

Voodoo Connect – It’s a great way for us all to discuss your project live and the quality is simply amazing.

View a cafe signing fascade like this an an ensemble and we present something that clearly works. Behind the fascia, there’s a great business serving wholesome foods and lovely infusions to customers attracted by the ambience the business radiates. We’re proud to have played a part in delivering this experience and it’s a bit beyond the signs for cafes you might be used to seeing.

Give us a call if you think we could do the same for your cafe or restaurant.

Let’s get in touch…

If you’re ready to discuss your project we’re ready to listen. Let’s get your ideas on the table and move your sign project forward.

Email us  Message us 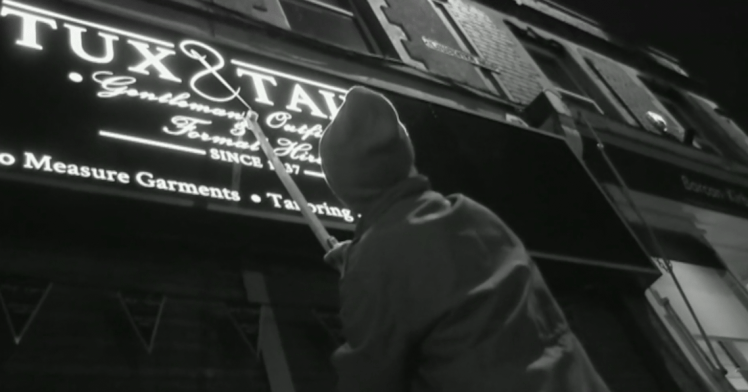 Signs in Bristol go from badder to worstest…

The grammar vigilante is in town and signs in Bristol go back to school.

It appears that things are just going from badder to worstest with signs in Bristol. Signs and graphics in Bristol are apparently littered with errant apostrophes, misplaced contractions and other crimes against modern English and her grammar.  A self-appointed “Bristol Grammar Vigilante” has taken up arms and he’s out there, correcting Bristol based signmakers’ errors wherever he sees them.  Could your business sign be the next beneficiary of his campaign?

BBC News has tracked down our language’s guardian prowling the city’s streets. Under cover of darkness and cowled in a hoodie, he corrects errors where he sees them. His medium is cut and applied vinyl which he uses to obscure what might offend the eye. Stuck on like sticking plasters, his work makes good what others, in his view, have made bad.

Is it a crime? He thinks not. The Grammar Vigilante says “It’s more of a crime to have the apostrophes wrong in the first place!” Where he’ll strike next is not known. All that can be said with any certainty is, he’ll be gravitating to signs in Bristol that in some way or other don’t speak The Queen’s.

Let’s send you a brochure…

It’s amazing what the Voodoo DesignWorks could do for you. It’s all in our brochure and we have one with your name on it.

We don’t know how far he’ll take his crusade. We don’t know who’ll join and strengthen his ranks. Maybe someone will be looking at shopping centre signs as a speciality. Maybe there will be a superhero crusader tearing through supermarket signage changing “Ten Items or Less” to Ten Items or Fewer.”

All the foregoing raises a smile and it makes a serious point too. If a sign maker in Bristol can’t get something as fundamental as grammar delivered properly, then what does it say about his quality overall?

Here in the Voodoo DesignWorks, we punctuate where design tells us we can and we do it properly. We have processes designed to trap grammatical errors before they’re immortalised in the signs we make and install in Bristol. We’re a Bristol based sign company whose work the Bristol Grammar Vigilante will stop in his tracks. Maybe he’ll take the time to adhere a little gold star somewhere discrete. Our work, after all, is widely regarded as best in class.

Let’s get in touch…

If you’re ready to discuss your project we’re ready to listen. Let’s get your ideas on the table and move your sign project forward.

Email us  Message us

We can very quickly put together and send you a personalised information packed based on your interest.

All we need’s an email address.